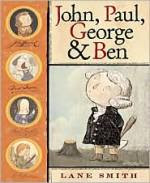 John, Paul, George & Ben by Lane Smith tells the story of what some of our founding fathers were like before the birth of our nation, taking us back to when John Hancock, Paul Revere, George Washington, Ben Franklin, and Tom Jefferson were boys. John was quite bold, taking up the whole chalk board to write his name. Paul was always shouting since he suffered some hearing loss in a bell ringing club (that was “before fun was invented”). George was honest to a fault–when dad forgave him for chopping down the cherry tree, he readily confessed to leveling the whole orchard and a barn! Ben was very clever, constantly coming up with sayings, and Tom was independent (he probably refused to be included in the title). Read this as a fun way to teach your child about people who helped make our country free.