Submitted by Tess from Lexington Park! 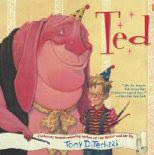 Ted is a really cute book by Tony DiTerlizzi, the fabulous co-author/illustrator of the Spiderwick Chronicles. In this story, a young boy who feels neglected by his father finds solace in an “imaginary” friend, a large raspberry-colored, rabbit-like creature named Ted. Ted has a lot of ideas of ways to have fun, starting with a harmless game called Monopoly-Twister, but soon evolving to more destructive activities like giving each other haircuts, or turning dad’s study into an indoor swimming pool. Finally the boy’s father forbids him to play with Ted ever again! Ted lets us in on a little secret though: when Father was little, he had an imaginary friend named “Ned” who his father forbid him to play with… If your child has an imaginary friend, they will probably relate to Ted, which I think is loosely based on DiTerlizzi’s own childhood! See this book listed in our catalog