Submitted by Allana from Leonardtown! 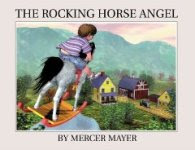 The Rocking Horse Angel by Mercer Mayer gives me goose-bumps all the way through, but in a good way. A boy has grown tired of the long summer days playing in the pond looking for polliwogs, toads, snakes, and bugs. He now turns his attention to closets, cellars and attics. The attic, in particular, intrigues him, and he has decided to take a peek in there even though, instinctively, he knows he isn’t supposed to. He sees something in the shadows which frightens him a bit at first: some creature behind a large box with a head, ears, eyes… what can it be? It’s a dapple gray rocking horse! The boy climbs up to find “her” a perfect fit. He daydreams about adventures they will have, and the rocking horse senses what the boy is saying. He has vivid dreams about riding in the night sky, looking down on the farmlands below. The horse seems to be trying to tell him something, in fact in the first dream the horse is crying, the tear so big it surrounds the boy like a giant bubble which carries him into the air. In real life, during waking hours, the boy has become very sick with fever, and his parents are by his bedside. The rocking horse appears to him during the night, and each time flies him off in a dreamy adventure. But one night she tells him that this is real, and no matter how scary the ride may become he must not let go. He is riding through a terrifying storm where giant creatures are trying to stop him, and the boy has to trust the rocking horse like never before… See this book listed in our catalog