Submitted by Catherine from Charlotte Hall! 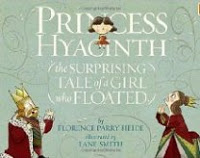 What kid hasn’t complained “I never get to do anything!” But what if it were true?! In Princess Hyacinth: The Surprising Tale of a Girl who Floated written by Florence Parry Heide, and illustrated by Lane Smith, the poor princess really is never allowed to do anything. Because if she does, she’ll float away! Hyacinth has the strange condition of being lighter than air. Without weights in her dress, and the heaviest crown on her head, she’ll float right up to the ceiling. Hyacinth never gets to play with the other children in the kingdom, though she is secretly in love with the kite flying boy named Boy, who has visited her window seven times (she’s counted). Children and parents will laugh at this silly story of a girl who just can’t keep her feet on the ground. But with the help of a new friend, she might be able find a way to have fun. See this book listed in our catalog