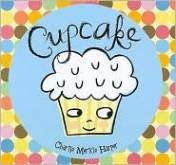 Cupcake by Charise Mericle Harper is a great story about how everyone is different. Vanilla Cupcake was creamy, white, and perfectly plain, but most certainly delicious. His brother and sister cupcakes were all decorated and different. There was Chocolaty Chocolate Cupcake, Pink Princess Cupcake, and even Fancy Flower-Top Cupcake, and they were all part of a very special cupcake family on a plate together. Until no one picked Vanilla Cupcake because he was too plain. Then a candle came by and he told Vanilla Cupcake that he was too plain too! The candle told Vanilla Cupcake all about his fancy candle family: there was a number candle, colored candle, twisty candle, and much more. Cupcake and Candle were feeling sad so they tried to make Cupcake special by putting pickles, cheese, and even spaghetti on him, but nothing worked to make him feel special, not even a squirrel. Then Candle and Cupcake got together to make a very special vanilla cupcake with a plain candle, and they were both happy. What a cute story to teach kids that everyone is different and everyone is special! The only problem is… now I really want a cupcake! Good news! There is a recipe in the back for Vanilla Cupcakes that are creamy, white, and perfectly plain, but most certainly delicious, and Plain Butter Cream Icing. See this book listed in our catalog