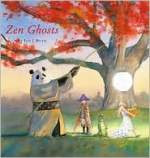 Happy almost Halloween everyone! As we prepare for our Halloween parties at the library, I wanted to tell you about a beautiful book, Zen Ghosts by Jon J. Muth. If you’re familiar with Muth’s other Zen books, then you already know Stillwater the panda, and his friends Karl, Michael, and Addy. It’s Halloween, and the kids are getting their costumes ready. Karl is going to be a monster, Michael either an owl or a pirate. Or an owl pirate. But Addy’s moon princess costume reminds Stillwater of an ancient Chinese ghost story, the chilling tale of a girl named Senjo who appears to be in two places at once… The story is an example of a koan, as Mr. Muth explains in an author’s note at the end of the book, or a question to contemplate. There is really no right or wrong answer; to intuit is the only point. This may seem like a slightly advanced concept for your child, but consider that the idea of duality is one a person begins to process very early in life: “There’s the me I am with my parents, the me I am with my friends, and there is still another me with a different group of friends.” Have a philosophical conversation with your youngster, or just enjoy a spooky story, with gorgeous illustrations, with Zen Ghosts. See this book listed in our catalog