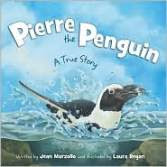 Pierre the Penguin: A True Story by Jean Marzollo. I love penguins, and this story is quite endearing! It is based on a true story about a penguin named Pierre. The story is written in rhyme, so it flows and is fun to read. Pierre is an African penguin who lives at the California Academy of Sciences with twenty other penguins in the African Hall. African Penguins are different from other penguins, and do not like the ice. Once day when Pam, the Aquatic Biologist who cares for the penguins, was feeding them fish, she noticed something wrong with Pierre. He was going bald! He had lost most of his feathers, and was very cold. The other penguins were afraid of Pierre, since he looked so different without his feathers. Pam tried to help Pierre in many different ways, until one day she got the idea to make him a tiny wet suit to keep him warm and well. With the wet suit on, Pierre was warm, and could go swimming with his friends. After a few weeks, the wetsuit helped Pierre to grow back new feathers! At the end of this story there is a page where Pam answers questions about her job, and Pierre. This story is a great way to build new vocabulary, like wetsuit, bray, neoprene, and aquatic, and is illustrated in a bright, clear way to show the new vocabulary! See this book listed in our catalog