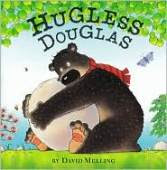 Hugless Douglas by David Melling is an adorable book I fell in love with the minute I picked it up. Douglas is a brown bear who wakes up one spring morning and goes in search of a hug! He looks for a BIG hug, but when he hugs a rock he finds it is too heavy. He looks for a TALL hug, but when he hugs a tree he does it all wrong and gets splinters. Next he looks for a comfy hug in a bush, but finds the bush is filled with sheep who do not want to be hugged by a bear. Poor Douglas doesn’t know where to look next, so he asks an owl for a hug, but that just makes the owl angry. Then he finds a rabbit. The rabbit doesn’t want a hug either, but he knows where Douglas can find a hug. The rabbit takes Douglas by the paw and leads him to a cave. When Douglas goes in the cave to look for a hug, he finds someone he knows… his Mommy! Douglas then snuggles into the biggest, warmest hug! See this book listed in our catalog