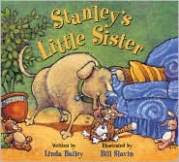 Have you ever wondered what your pets are thinking? In Stanley’s Little Sister by Linda Bailey you get to see how the dog Stanley feels about a new cat that his people bring home. Stanley really wants to be friends with the new cat, but they just don’t speak the same language. Literally! Stanley speaks dog to the cat, and she just doesn’t understand, and neither do Stanley’s people. He tries to say “Hi” to the cat, and she bats him in the nose. He tries to give the cat some of his toys, and she runs away. He knows he isn’t supposed to chase her, but for some reason he just can’t help it! He tries to lie on the couch with his people, and the new cat, but he gets in trouble, and is put out on the porch. Stanley even meets up with his doggy friends at the dog park to get their advice on how to make friends with the cat. In the end, making friends with her turns out to be very simple, and Stanley finds he likes having a new little sister! See this book listed in our catalog