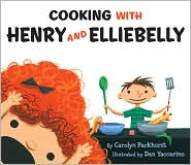 A few months after my parents brought my new baby brother home from the hospital, I asked when he’d be going back. And while I might not have thought so at the time, I now know that my life would have been much less exciting without my younger brother. In Cooking with Henry and Elliebelly, written by Carolyn Parkhurst, and illustrated by Dan Yaccarino, we meet an older brother who is experiencing just how interesting life can be when a little sister tags along. Henry is determined to make a good pretend cooking show that will be just right. He will have chef hats, and the right ingredients, and the right directions. Anyone who has a little brother or sister knows that things might not go quite right for Henry. With pirate hats instead of chef hats, and a certainty that pizza is a key ingredient in waffles, Henry’s little sister drives him up the wall! But by the end of the book, Henry has decided that playing with his little sister isn’t all that bad. This is a great book if you have an older sibling at home that is sometimes frustrated with the new addition in the house, or if you just think that cooking shows can be improved with pirate hats. If you do, come back next week for Pirate Cooking with Henry and Elliebelly! See this book listed in our catalog