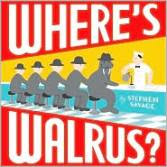 Check out Where’s Walrus by Stephen Savage for a fun, wordless story, with nostalgic illustrations, reminiscent of retro ad campaigns! It’s about a walrus who is bored of the zoo, so he decides to have a day out on the town, much to the zookeeper’s dismay! The zookeeper runs around a cityscape wondering where the walrus is. The zookeeper can’t seem to track Walrus down, but I bet your child can! Walrus is hidden in each illustration (in some a bit more successfully than others, with humorous results). Finally the zookeeper tracks down his walrus at a swimming pool, which leads him to an idea that might make Walrus’s days less boring in the future… Solve the mystery of Where’s Walrus today! You won’t be disappointed! See this book listed in our catalog