Submitted by Ms. Tess!
Avast me hearties! I hope there be no land-lubbers reading the blog today, because we love pirates here at St. Mary’s County Library! (Not the kind you occasionally read about on CNN, of course, but the kind with peg legs, and eye patches, and a propensity to shout “Arrrgh!”) Here are two wonderful books to share with your little one about our favorite sea-farers! Yo ho ho! 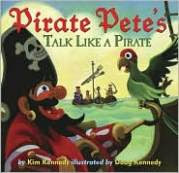 In Pirate Pete’s Talk Like a Pirate by Kim Kennedy, with illustrations by Doug Kennedy, we meet the captain of a fine vessel in need of a crew. With his trusty pet parrot, he sails to Rascal Island, to recruit the most qualified scallywags available. In order to join his crew, there are several things you must be able to do, but the most important is talk like a pirate! Sadly, these scurvy dogs did not get the “pirate talk” memo, like the once-promising candidate who tells Pete his beard “is quite itchy, especially during the summer when the weather tends to be sultry,” when he clearly should have said “when the sun’s a blazin’ me beard gets the itches, worse than a bucket of sand down me britches” and therefore must walk the plank…Will Pete ever find a capable crew? You’ll have to read to find out! See this book listed in our catalog

The hero of Brett Helquist’s Roger the Jolly Pirate might also need some coaching in how to be a proper pirate. He has a terrible sense of direction, he’s always smiling instead of scowling, he has a pet chicken instead of a parrot, and he’s always ready to play a rollicking sea shanty on his concertina. In short, he’s “never struck fear into any sailor’s heart.” In fact, when there’s raiding to be done, he’s sent to the brig. On one such occasion, Roger decides to bake a cake. Perhaps the other pirates will like that, and include him more. You might not think that cake baking would lead to an overwhelming pirate victory… but you’d be surprised! In fact, Roger’s attempt at manufacturing culinary delights leads his pirate colleagues to make a flag in his honor! Perhaps you’ve seen “The Jolly Roger” gracing the mast of a fierce pirate ship. Find out its origin in this book, and learn a song about it! See this book listed in our catalog