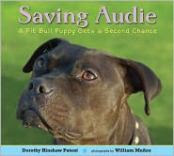 Saving Audie: A Pit Bull Puppy Gets a Second Chance by Dorothy Hinshaw Patent, with photos by William Muñoz, is the inspirational true story of one of the dogs rescued from Bad Newz Kennels, Michael Vick’s dog-fighting outfit that was shut down in 2007. Typically dogs held for evidence in court are put to sleep after the trial is over. Luckily, several animal rights organizations banded together to save the “Vick dogs.” One of those dogs was a black pit bull puppy, eventually named Audie. Audie was able to be cleaned up, trained, and adopted! He had some knee problems, but was able to get surgery, and now does agility training. And he didn’t trust people at first, but now he has lots of friends–people, and other dogs! The book also has an informative section in the back, with facts about pit bulls and the Michael Vick case. Saving Audie is a wonderful book about overcoming adversity to become the best you can be! See this book listed in our catalog or read more about Audie at the Vick Dog Blog