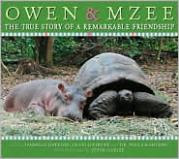 Owen & Mzee by Isabella Hatkoff, Craig Hatkoff, and Dr. Paula Kahumba is the incredible true story of a very unusual friendship between a baby hippo and a 130 year old giant tortoise. In December 2004 there was a tsunami in Southeast Asia, during which a very scared baby hippo was left stranded and all alone. After his rescue, he was placed in an enclosure where he quickly scrambled over to an old tortoise and adopted him as his mother. The tortoise was not sure of this baby hippo at first, but it wasn’t long before they became inseparable, and an unexpected friendship evolved. This is a very unusual friendship, and a true story about how animals can decide to be friends no matter how different they are. See this book listed in our catalog