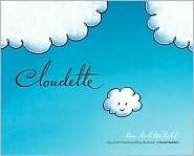 Cloudette is a cloud, a very small cloud (also known as pipsqueak, shortcake and small-fry). She lives in a neighborhood full of big clouds who go off and do big cloud things like make rainbows and thunderstorms with lightning. Cloudette longs to be like the others. One day a huge storm happens. It was far larger than any she could remember (it was probably a hurricane). It was so strong it blew her right out of her own neighborhood! She didn’t know anyone in this new place, but they seemed friendly enough after awhile. When she meets a frog, she finds him in a shallow pond, all shriveled up into barely a puddle. Feeling sad for the frog, she huffed and puffed a little and, for the first time, let it pour. The puddle became a larger puddle, then a pond, then an even bigger pond. The frog was so happy, and so was Cloudette! She realized that even though she’s small, she still has a place and a purpose in the world. So, off she went to explore and make puddles into ponds for everyone. Cloudette by Tom Lichtenheld is a delightful little tale about weather and fitting in. Who knew that humans and clouds had so much in common? If you like Duck! Rabbit!, give this one a try too! See this book listed in our catalog