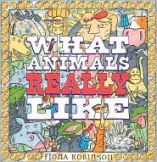 What Animals Really Like is a book by Fiona Robinson, and a song by Mr. Herbert Timberteeth *wink wink* the beaver. This ambitious beaver has composed an operetta about what animals like most, starring all his friends. Lions like to prowl, wolves like to howl, pigeons like to coo, cows like to dig. Wait, what? Cows don’t like to dig! But apparently they do! The animals begin informing their frustrated conductor of the things they actually like to do, which aren’t in line with what the beaver, and the rest of us, might assume. For instance, the warthogs like to blow enormous bubbles! (They’re going for a world record!) And the shrimp like to ski! (Really! They just got back from Switzerland and had amazing weather.) Mr. Timberteeth finds out you can’t judge a book by its cover as he learns his song is all wrong and his friends have diverse hobbies and interests he’d never dreamed of! (Except the mice. They really do like cheese!) The book features fun fold out illustrations, and will hopefully inspire you and your little one to laugh and sing along to one of the silliest musical productions ever staged in children’s literature! See this book listed in our catalog