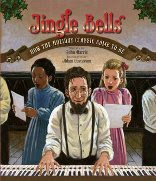 Jingle Bells: How the Holiday Classic Came to Be by John Harris and illustrated by Adam Gustavson. In 1857, John Lord Pierpont was inspired to write a new Christmas song during an unusually hot Savannah, Georgia day for the Thanksgiving concert at his church. He was telling is daughter Lillie about the cold and snowy winters in Boston when he was younger, and realized she had never seen or felt snow. “What’s snow like exactly?” asked Lillie. He started describing the crisp, cold air, and a sleigh with sleigh bells. Later, while at the keyboard of the church’s pipe organ, he tapped the keys three times plink-plink-plink, then did it again. Jingling bells, that’s what they sound like. He sang along, and before you know it he wrote a song originally called “One Horse Open Sleigh” for the children of the congregation to sing. As they finished the song, complete with strands of bells, and feathers thrown like snow, the audience burst into applause. See this book listed in our catalog