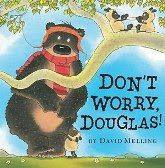 Don’t Worry, Douglas! by David Melling. The adorable Douglas is back in a new adventure with a hat! When we first met Douglas the bear, he was looking for a hug. In this installment, Douglas has been given a new woolly red hat by his dad! Douglas is so excited, he runs out to play right away. He jumps, tumbles, and even does cartwheels in his new wooly red hat! Then, all of a sudden, he realizes his new wooly red hat has unraveled into a long string of spaghetti! The sheep suggest he ball it up and put it on his head, but it just isn’t the same, so he asks the cow. The cow thinks it would make a pretty wig! The bird thinks it would go great in her nest, and the rabbit wants to use it to plug up her burrow, but Douglas does not want to use his hat those ways. He decides to just tell his dad what happened, so he goes back home with this new wooly red hat in a pile of wet spaghetti. After Douglas tells his dad everything, his dad says, “Don’t worry Douglas” and gives him his hat for Douglas to grow into! Like the first Douglas book, this is a great tale with a silly bear and loving parents. I remember a similar incident in my life (I am sure we all can), where I was sure I had ruined something, and was going to be in trouble forever! Mine was a umbrella not a hat. But just like Douglas’s dad, my parents weren’t mad like I thought they would be. In the end, their love for me was greater than the cost of the umbrella! What a great lesson to teach little ones! Read this story, as well as Douglas’s search for a hug, today! See this book listed in our catalog