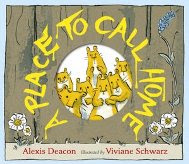 A Place to Call Home by Alexis Deacon. A family of hamster-like creatures, all brothers, have lived all their lives in a small, dark, warm, safe hole. But now they’ve grown too big for their little nest, and must set off into the big, wide, scary world beyond in search of a new home. The brightness of the outside world is too scary, so the little animals hide their heads inside found objects – a boot, some gloves, and even a teacup. From that point onwards the story is told comic-book fashion, with illustrations and word balloons showing the brothers’ comical confusion as they make their way across the junkyard that surrounds their old home. Only one brother can see out of his silly headgear, and so they mistakenly identify almost everything they encounter. A puddle becomes the sea, a frying pan is a boat to paddle across it, a desk is a mountain, and a sand pile is an endless dessert. When they cross the top of an old washing machine and find its far side, they believe they’ve found the “edge of the world.” Frightened and unsure, the little animals are discussing their next move when a huge beast appears and carries off one of the brothers! What can they do? The beast is too big and they are too small! But wait – they’ve crossed the sea, climbed a mountain, survived a desert, and walked to the very edge of the world, and they’re not about to let a beast steal their brother! With their newfound courage, the remaining brothers charge the beast (a dog) to make a dramatic and hilarious rescue. While making their getaway, the little family finds a knothole in the fence that leads to the even bigger, brighter, grander world beyond. No longer afraid, the small creatures head out into the sunlight to make their way in the world at last. See this book listed in our catalog