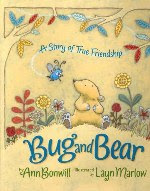 Bug and Bear by Ann Bonwill is a story about a bug and a bear who are friends. Bear is very tired, and all she really wants to do is get to her cave and take a nap, but Bug wants to play with Bear, and he follows her, buzzing around her, asking and asking Bear to play. Bear tries to get rid of Bug, but Bug just doesn’t get it. He thinks Bear is just playing games with him. Bear gets an idea from Chameleon, and she tries to hide from Bug by blending in with a tree, but it doesn’t work. Bug thinks Bear is playing hide and seek. Bear gets an idea from turtle, and tries to crawl inside a log, but Bug just thinks Bear wants to play follow the leader. Finally Bear has had enough, and she tells Bug to go jump in a lake, then she goes in her cave and tries to nap. Now Bear can’t sleep. She feels so bad about the way she treated Bug. She decides to go try to find him. She looks everywhere, but can’t find him. Then the other animals remind Bear that she told Bug to go to the lake, so Bear runs to the lake and finds Bug drifting on a lily pad. Bear rescues Bug, and then wants to play, but Bug is just too tired, so they both take a nap together. Bug and Bear is a story of true friendship. See this book listed in our catalog