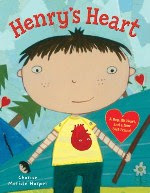 Henry’s Heart by Charise Mericle Harper, illustrations designed by Elynn Cohen with acrylic paint and collage on watercolor paper. Henry’s heart and the rest of his body are shown in X-Ray vision with some of what you might see. Henry’s class mates make observations and remarks about his heart and the things it does. Henry’s heart also makes many observations about its self. One of the things Henry’s mom wants from Henry and his heart is exercise. When Henry’s dad takes Henry for a walk into town, his heart observes how it beats and why. Then when Henry falls in love with a puppy that his dad doesn’t get for him, his heart feels lots of things including broken. Henry’s heart eventually gets excited and very happy because his parents eventually do get his dog for him. His heart is excited because it gets stronger from the everyday walking, chasing, running, and playing Henry does with his dog! See this book listed in our catalog