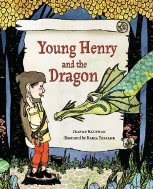 Young Henry and the Dragon by Jeanne Kaufman. Young Henry is a traveling squire who finds himself at day’s end in the forest without a flame to light his fire. It occurs to him that not far away there is a dragon and if he can find his lair maybe he could trick or joke him into a snort of fire. Henry searches the forest until he finds the dragon. Henry then acts up in as many silly shenanigans as he can think of to make the dragon laugh and snort, but all of his tricks and jokes do not strike the dragon as funny. That is until Henry accidentally trips himself up… Friendship is often found under the most unusual circumstances as Henry and the dragon find out. This silly story is told in rhyme and illustrated with whimsical artwork of drawing, painting, and doodling to create a medieval cartoon-like presentation. See this book listed in our catalog