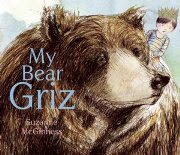 In the tradition of “Calvin and Hobbes” comes My Bear Griz by Suzanne McGinness. Meet Billy. He really likes bears. Especially his bear, Griz. Billy imagines he is best friends with an enormous brown bear. Billy and Griz go exploring together, they eat “peanut-butter-and-honey” sandwiches, and play hide and seek. (Billy usually wins. I mean, where are you really going to hide if you’re a Grizzly Bear?) Griz is a great partner for napping, and star gazing. He’s really good at keeping secrets, and tells hilarious jokes. At the end of the book we see Griz as others see him–Billy’s teddy bear. This book has big illustrations, and simple text, making it great for young readers and listeners. The pictures are charming and kid friendly, and any child with a favorite toy they take every where, especially a boy with a bear, is sure to relate. See this book listed in our catalog