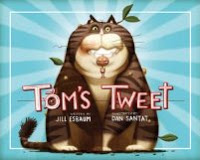 Tom’s Tweet by Jill Esbaum has wonderful characters, a witty story, a surprising friendship, and a happy ending! With rhythmic verse, in Limerick style, the story bounces along to the amazing, artful illustrations by Dan Santat. Tom, the mean, pudgy cat, is about to make a meal out of teeny little Tweet, when he decides that Tweet is too little and skinny to eat, so he decides to try to put him back in his nest. That was a mistake, because Tweet’s mommy thinks that the big hungry kitty is coming to eat her chicks! The situation becomes stranger and funnier as Tom, who has to care for and feed Tweet (chewed worms), develops a bond with Tweet, and realizes he likes to have the wee bird in his life (not that he has a choice)! This is a great story for parents to read to young pre-school aged children–even better if the grown up can chant the poetic prose in a sing-song style! See this book listed in our catalog