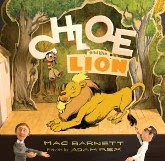 Feel as if you’re part of an audience at a play as you read Chloe and the Lion written by Mac Barnett and illustrated by Adam Rex, Hank Blowfeather, and also Mac Barnett. This story begins with Chloe, a young girl who loved to ride the merry-go-round on Saturday afternoons. One Saturday, she rides so many times that she becomes dizzy and ends up lost in the woods. Once in the woods, she meets up with a HUGE lion. Wait…maybe not a lion. Maybe she should meet a HUGE dragon instead. Aren’t dragons cooler than lions? The author, Mac Barnett, has written that Chloe meets up with lion. The illustrator, Adam Rex, has decided that a dragon would be cooler. The story is taken over by the author and illustrator “discussing” each of their opinions on how the story should be told. After drawing Mac wrapped as a birthday present and a cowboy, Adam is fired. Enter Hank the artist. Hank the artist doesn’t quite capture the fierceness that Mac is looking for in a lion. After a few tries, Hank suggests Mac use a dragon instead. A dragon would be cooler. Hank is fired, too. Mac decides that he will be the author AND the illustrator. Things go from bad to worse as Mac realizes, with Chloe’s help (mostly because Mac has drawn Chloe badly, really badly) that books need authors, illustrators, and characters all working together in order to create a successful book. With hilarious dialog and wonderfully silly illustrations, this book is great for older readers who are ready to learn about how a book is produced, and for all readers and listeners who enjoy colorful, silly illustrations. See this book listed in our catalog