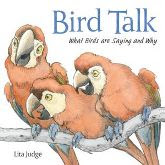 Why do birds do the things they do? What are they trying to say? If you or a child you care for have ever asked these questions, you need to check out Bird Talk by Lita Judge. For instance, the Sage Grouse is puffing up his feathers and strutting about to capture the attention of a potential mate. He’s saying “I’m the strongest.” Or “Pick me!” And Emperor Penguin parents must find their chick among the thousands of other chicks when they return from fishing. They will call to each other until they’re reunited. Their trumpeting is their way of saying “Over here!” There are many birds featured in the book and the names of the species are color coded to match the illustrations of the birds on many pages. My favorite is the palm cockatoo. Not only does he look punk rock with his Mohawk-esque plumage, but he’s also known to break sticks and knock them against his tree to communicate his territory. How punk rock is that? See this book listed in our catalog