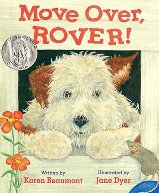 Move Over Rover by Karen Beaumont is a story about a dog named Rover who is just taking a nap in his nice warm doghouse when a storm comes along. Rover is safe and warm in his doghouse, when along comes Cat looking for a dry warm place and saying “Move over, Rover!” So Rover moves over and makes room for Cat. Then along comes Raccoon looking for a place that’s warm, and he sees Rover and Cat in the doghouse and says “Move over, Rover!” so Rover moves over and makes room for Raccoon. Then along comes Squirrel, then Blue Jay, then Snake, then Mouse. It’s getting quite crowded in the doghouse! Then all of a sudden they all say “What’s that awful smell?” and they all hurry out of the doghouse because they have discovered that Skunk is in the doghouse sleeping through the storm! Finally the storm is over, and all the animals can come out and play, and Rover, of course, finds his way back to his doghouse where he can nap and be happy that he is alone! See this book listed in our catalog