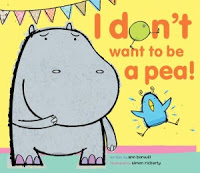 I Don’t Want to Be a Pea by Ann Bonwill is a story about friendship. It is about Hippo and Bird. They are both very excited about the fairy-tale fancy dress party. They have to go in costume and, of course, they have very different ideas about what their costume should be. Hippo thinks they should go as the Princess and the Pea and, of course, Hippo should be the princess and Bird should be the pea. Bird has other ideas. She does not want to be a pea. A pea is just too green and small. She thinks she should be a mermaid and Hippo should be her rock. Hippo does not want to be a rock. After all a rock is just too gray and blobby. How about Cinderella and her pumpkin? Bird would be Cinderella and Hippo would be the pumpkin, but Hippo does not appreciate being painted orange, even though he does look rather nice in orange. The two argue until they decide they don’t want to go to the party anymore. After they think it over they decide they don’t want to go to the party without each other, so they both show up at the party dressed as the pea, and they are both happy. See this book listed in our catalog