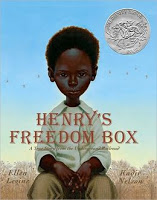 Henry’s Freedom Box by Ellen Levine, illustrated by Kadir Nelson, is the true story of Henry “Box” Brown, a slave who mailed himself to freedom in a wooden box. Though short and simply told, the story is powerful; even young readers will understand the emotions Henry felt when he watched his wife and children, who were owned by a different master, being sold like animals and sent away. Losing his family made Henry determined to escape slavery forever, and he hatched his dangerous plan: friends would nail him inside a wooden crate and ship him to abolitionists in the free city of Philadelphia. If Henry were caught, he would have faced severe punishment, and so would the friends who helped him. The journey itself was difficult and dangerous too, since Henry was trapped inside the box for days and could have been smothered, crushed, or bashed along the way! Kadir Nelson’s beautiful illustrations add a great deal to the story, especially by showing cutaway views of Henry inside his box as it is bumped, thrown, and dropped upside down on the long trip to freedom! See this book listed in our catalog