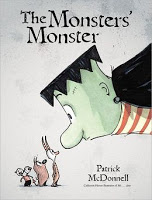 The Monsters’ Monster written and illustrated by Patrick McDonnell. There was once three little mischievous monsters named Grouch, Grump, and Gloom ‘n’ Doom. They thought they were the biggest, baddest monsters around. They spent their time arguing over who was the best biggest, baddest monster by doing monster things like smashing, crashing, and huffing and puffing. Their favorite words were no, no, no, no, no, and no. Then one day they decided to make an even bigger monster. Together they gathered bolts, and wires, and gunk, and gauze, and all kinds of stuff. Then with the help of a great big “BAM” lightning bolt, a new creature was created. A “Big! Bad!! Monster!!!” they all cheered together. When he woke up he said “Dank You!” and gave them a hug. Soon the little monsters found out that their big monster was not exactly the kind of monster they thought he would be. See what happens when their big monster teaches them a lesson in gratitude. See this book listed in our catalog