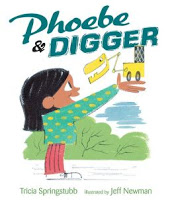 Phoebe & Digger by Tricia Springstubb and illustrated by Jeff Newman. When Phoebe’s mama got a new baby, Phoebe got a new digger! Phoebe’s mama and the baby were always busy. When the baby cried, Phoebe’s digger went “RMM!” When the baby burped or went poop, Phoebe’s digger went “RMM!” Eventually mama decided Digger needed to go to the park. Phoebe and Digger played in real sand and dirt! Digger and Phoebe pretended to eat a boa constrictor that was really a worm. “Eeek!” a crybaby boy said. He didn’t like worms, and Phoebe pushed Digger closer to him on purpose. Mama told Phoebe to be nice before she put Phoebe on the bench to sit for a bit. Then a big girl took Digger! What will Phoebe do? Will she have more adventures in the park? And what new lessons will Phoebe learn today? Find out in this large sized watercolor and ink illustrated picture book. See this book listed in our catalog