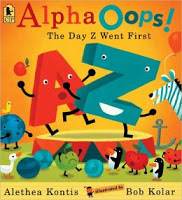 Alpha Oops! The Day Z Went First by Alethea Kontis is an alphabet book. The story starts out with A of course, until Z appears and demands A stop. Z and Zebra are sick and tired of always being last in line. They demand free and equal treatment. Y agrees it’s time for a change. All the letters agree to give it a try. They start out going backwards in order until P decides to go out of turn because he is sick of being stuck in the middle all the time. They agree P is right and so the letters start going out of turn. A thinks this is just a mess but Z thinks it will be great.The letters all argue about where they get to go in line and how many things they get to say that begin with their letter. It all gets pretty confusing. By the time A gets his turn at the end, A has had so much time to think he comes up with lots of things that begin with the letter A! Everyone agrees that was a marvelous ending and it didn’t turn out so bad after all. But they do all agree they should go back to normal, and if Z ever wants to try this again all he needs to do is ask! See this book listed in our catalog