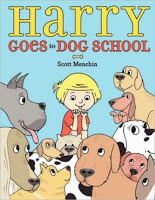 Harry Goes to Dog School by Scott Menchin. Harry is a little boy who wants to be a dog. His parents keep trying to get him interested in boy things, but Harry just growls and ruffs and licks. Finally his parents decide to send him to dog school. Pavlov Royal Academy is the name of the school, and Harry is the newest student. For Harry it is a dream come true. All his classmates are dogs. Harry loves everything they do until lunch… It is not what he expected. As the day goes on Harry finds that he misses a lot of things that little boys do, like baseball and riding his bike. He also finds out that there are some things that he doesn’t like about being a dog. Dogs can’t color or build with blocks. Finally, at the end of the day, Harry announces at dinner: “I think I would like to be a boy again.” Harry’s parents are OK with that. Then Harry goes to a new school with kids and behaves like a boy… most of the time. See this book listed in our catalog