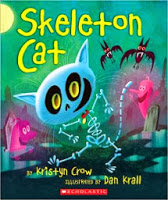 Skeleton Cat by Kristyn Crow, illustrated by Dan Krall. Crash! Zap! Skeleton Cat wakes up, gives his bones a shake, stretches, and goes Rattle, Yawn. “Rattle. Rattle, Clink. Tip top. Purrrrrrrrrr. Ka-plink, ka-plink, ka-plink.” Some bats zip by, and the ghosts are moaning, when Skeleton Cat says “Where am I?” He sees that he is all bones as he jumps around. Just then a gust of wind blows a flyer by that says there’s an audition for a drummer. Skeleton Cat has been dreaming all his nine lives about becoming a drummer. Well, the ghosts and the owls start laughing. A drummer in the living world? “You’re a spook! A ghoul! A phantom cat!” But Skeleton Cat is not deterred. He hurries on his way, all the while going “Rattle, clink. Tip top. Purrrrrrrrrr. Ka-plink, ka-plink, ka-plink.” Along the way, kids clap to the rhythm. Then he runs into trouble. A dog tries to bite him and a rat tries to chew him. Finally, he makes it to the audition! Find out how Skeleton Cat performs as he drums his way with rhythm and chills. See this book listed in our catalog