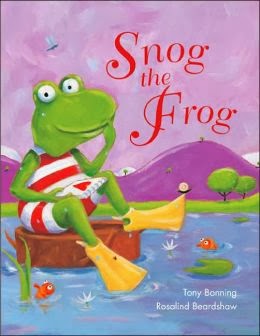 Snog the Frog by Tony Bonning is a fairy tale story about a frog who wants to be a prince. Today is Frog’s birthday and he wishes he could be a prince, but to be a prince he needs a kiss. Frog decides to go searching for a kiss so his wish will come true. He first sees Cow and he asks Cow for a kiss. Cow refuses. He hip hops along until he runs into Sheep. He asks Sheep for a kiss. Sheep also refuses. He continues on and asks Snake and then Pig for a kiss. They both refuse. He then comes across a princess. The princess says she has heard about this in fairy tales and says with one kiss he should turn into a handsome prince. She agrees to kiss Frog. She kisses him and nothing happens. Frog convinces her to try again and again but still nothing. The princess gets very aggravated and refuses to try anymore. She tells the frog she has tried and tried and he has not turned into a handsome prince. Frog says she is right, but he is happy, because he feels like a prince! See this book listed in our catalog