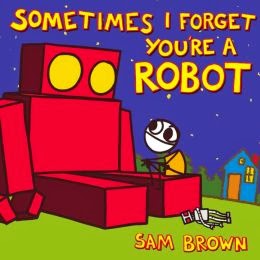 Finally a picture book for children from exploding dog artist Sam Brown! Sometimes I Forget You’re A Robot is the story of one boy’s dream to meet a real robot. Every time he sees a jet fly by, or a shooting star, he imagines it’s a robot coming to earth. And one day it is! SO COOL! His very own robot in his very own backyard! There’s so much they could do together! Like fly to the moon! Except the robot doesn’t fly… That’s okay! They could go to the bottom of the ocean instead! Except the robot doesn’t swim… It just kind of goes “BEEP BEEP BEEP” a lot. But there are some things the robot can do, like be a best friend forever. This is a sweet, accessible story, sure to appeal to kids and caregivers alike. See this book listed in our catalog