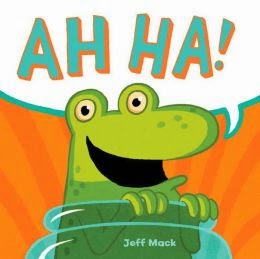 AH HA! by Jeff Mack is a story told using just two letters. Even though the story has only a few words, it is told beautifully. Frog is happy just relaxing in the pond when someone comes along and tries to catch him in a jar. Oh no! He is caught, but then the lid falls off the jar and Frog is free again. He climbs back on his rock and is safe again, or so he thinks. Then Frog discovers that he is actually sitting on Turtle. Turtle is happy and thinks he has a frog snack. Luckily Frog is able to get away. He is safe again, or so he thinks. He then discovers that he is resting on top of a hungry crocodile. He escapes just in time. He is safe again, or so he thinks. Until he realizes he is clinging to Bird’s leg and about to be eaten. He hops away and jumps right into the jar again. He is caught, or so they all think, until the lid pops off the jar and Frog is free again. It’s amazing how Mack is able to tell this story, and tell it so well, using just two letters! See this book listed in our catalog