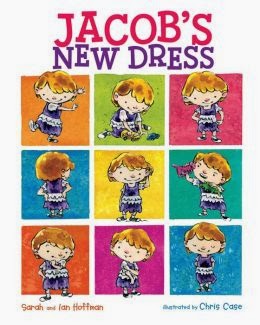 “There are all sorts of ways to be a boy” is the heartwarming message of Jacob’s New Dress by Sarah and Ian Hoffman, illustrated by Chris Chase. Jacob loves to play dress up at school with his friend Emily. “I’m the princess.” he proudly says, donning a sparkly pink dress, and a crown. Christopher says that boys shouldn’t wear girl clothes though. When Jacob gets home from school he tells his mother this. She says “Of course they can,” and hugs him, and reminds him on Halloween he dressed as a witch! Jacob loves his witch dress. He likes the way the black lace twirls around him. “I want to wear my dress to school!” he says. “Let me think about that,” says his mom. The next day Jacob comes downstairs for school with a bath towel wrapped around his shorts and shirt. “It’s not a dress,” he assures everyone who asks, “It’s a dress-thing.” But that’s not good enough for Christopher, who yanks it off while they’re playing outside. Jacob cries when he comes home. “Can you help me make a real dress?” he asks his mom. “Let’s get the sewing machine.” she says. Jacob is excited to show it off to his dad. “I can see you worked hard on that dress,” Dad says, “It’s not what I would wear, but you look great.” At school the next day, Christopher has had enough. “Why does Jacob wear dresses?” he asks. Their teacher says “I think Jacob wears what he’s comfortable in. Just like you do.” Even when kids laugh at Jacob, he doesn’t care. His dress surrounds him like “soft, cottony, magic armor!” Many children are what the clinical world call “gender non-conforming.” Much like little “tomboys” – girls who like traditional “boy” things – there are many boys who like traditional “girl” things. And that’s okay! We don’t know what a gender-nonconforming child will be like when they grow up, but we do know they need support from their families, teachers, and other people in their lives! See this book listed in our catalog