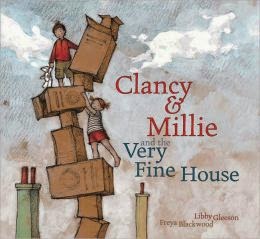 Clancy and Millie and the Very Fine House by Libby Gleeson and illustrated by Freya Blackwood. Clancy has moved to a very fine dwelling. Or so Clancy’s father said when they moved in. “It’s too big,” whispers Clancy. He remembers his old cubby house, where he used to live, where everything was smaller. His parents think the new house is bigger and better than the old one. Clancy goes outside and discovers a very large pile of boxes–moving boxes that held the new stuff in his new house. He pokes and crawls around them, and even crawls inside one when he hears a voice say, “Can I play too?” Millie introduces herself to Clancy, and they begin to play, creating towers and stories to act out with them. “It’s the best house,” says Millie. “It’s a very fine dwelling,” said Clancy. Making friends is what makes a new house a home. See this book listed in our catalog