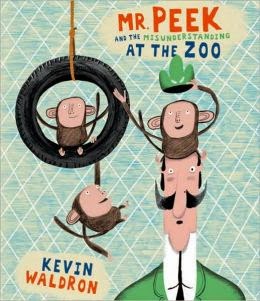 Mr. Peek and the Misunderstanding at the Zoo by Kevin Waldron is the story of a zookeeper, Mr. Peek, who gets dressed one morning and finds that his jacket is far too tight. He makes his rounds at the zoo, all the while muttering to himself about his terrible diet and getting old. The animals overhear him and think he is talking to them. The elephant thinks he is getting old and wrinkly, the bear believes that he stinks, and the giraffes think none of the animals even like them! When Mr. Peek sees his son, Jimmy, in an oversized jacket, he realizes that he is wearing Jimmy’s jacket, meaning he isn’t getting old or eating terribly. As Mr. Peek heads back home in his own jacket, he reassures himself as he passes by all the animals in a much better mood. The elephant is delighted to hear that he looks fine the way he is, the bear is reassured that he doesn’t stink, and the giraffes know that the other animals are like family. The illustrations are perfect, showing the concern on the animals’ faces when they hear Mr. Peek’s comments in the morning and the relief when he passes by again later. This book explores what can happen when we think we know what someone means, but we’ve really misunderstood them. See this book listed in our catalog