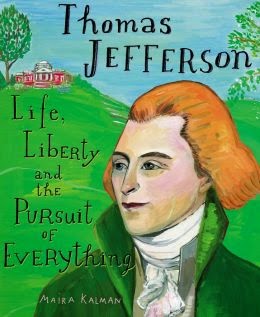 Maira Kalman makes excellent books for children. She relays information kids are actually interested in in a way they can actually understand. Her biography Thomas Jefferson is a prime example. As a child, Jefferson was interested in EVERYTHING. He loved to read. He even said “I cannot live without books.” He read books on every topic imaginable. His love of learning lead to an amazing life. In addition to being the third president of the United States, he designed his home, Monticello, on a mountain in Virginia, filled it with incredible collections, and surrounded it with magnificent gardens. He loved music and practiced the violin every day for three hours! He was friends with founding fathers Ben Franklin, John Adams, and George Washington. He was the author of the Declaration of Independence, and doubled the size of the U.S. with the Louisiana Purchase, famously explored by Lewis and Clark (and Sacagawea). But Kalman reminds us “the monumental man had monumental flaws.” Jefferson owned about 150 slaves. Although he was reputedly kind to them, and even in love with one, Sally Hemings, owning slaves is just wrong, and hypocritical for a man who believed that “all men are created equal.” But he was still an extraordinary man, of many great achievements. He wrote his own epitaph for his gravestone and it doesn’t include anything about being president. Really, the story of Jefferson is not unlike the story of America as we continue to grow. Kalman says, “If you want to understand this country and its people and what it means to be optimistic and complex and tragic and wrong and corageous, you need to go to Monticello.” See this book listed in our catalog