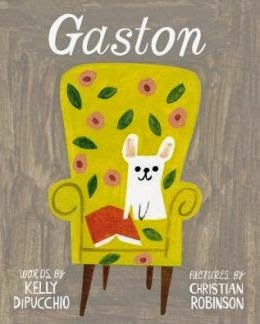 Gaston, by Kelly DiPucchio, with illustrations by Christian Robinson, is a gripping tale of two puppies SWITCHED AT BIRTH. Mrs. Poodle, a perfectly sensible French Poodle notices one of her puppies is not like the others. Gaston grew much bigger than a teacup, he “RUFFS” when his siblings “yip yip,” he’s not particularly graceful, and he doesn’t look particularly pretty in pink. But Mrs. Poodle loves him all the same. One day she’s showing off her pups at the park when they run into a family of French Bulldogs. Mrs. Bulldog notices one of her pups, Antoinette, bares more than just a striking resemblance to the Poodles. “It seems there’s been a terrible mistake,” she remarks, and Mrs. Poodle responds with a “Oui oui.” So Gaston and Antoinette trade places. But it just doesn’t feel right. To anyone. Gaston may be a Bulldog, but he was raised by Mrs. Poodle to be precious like a Poodle. And Antoinette may be a poodle, but she was raised by Mrs. Bulldog to be brawny like a Bulldog. So they trade back. And it feels right. From then on, the Bulldogs and the Poodles would meet every day to play. The Poodles taught the Bulldogs how to be tender, and the Bulldogs taught the Poodles how to be tough, and when Gaston and Antoinette fell in love and had pups of their own, they taught them to be anything they wanted to be. See this book listed in our catalog