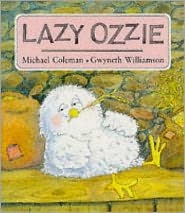 In Lazy Ozzie by Michael Coleman, we meet a baby owl named Ozzie. Ozzie’s mother thinks it’s time for him to learn to fly. Ozzie is perfectly happy lazing away and practicing being wise. Learning to fly looks like an awful lot of work to him. When his mother tells him to be on the ground by the time she gets back from gathering food, Ozzie decides to be wise. Instead of flying from his perch to the ground, he rounds up his barnyard friends with cries of “HELP!” and hops from the tallest to the shortest, gradually reaching the ground. His friends aren’t too pleased to learn that his cries for help were all part of his wise master plan. What Ozzie doesn’t know is that Mother Owl has been watching the whole time. As an added bonus, the illustrator, Gwyneth Williamson, has hidden Mother Owl on each page during Ozzie’s “flight” to the ground. Will Mother Owl let Ozzie get away with this trick, or is she a little too wise for that? You’ll have to read to find out! See this book listed in our catalog