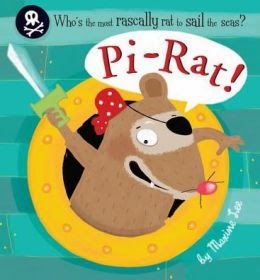 Who’s the most rascally rat to sail the seas? Pi-Rat! by Maxine Lee. Pi-Rat and his fearsome crew, gray cat and orange squirrel, are enjoying a carefree pirate’s life. There are absolutely no rules on Pi-Rat’s mighty ship. They aren’t afraid of anything, not even crocodiles, hungry sharks, or even the dark. One day while searching for buried treasure on the beach Pi-Rat spots a scary sight in his telescope. There it was, the most gruesome beast, “A Pirate Queen.” They are surely doomed! Just when Pi-Rat’s crew is taken, the bathtub plug was pulled. Standing at the tub with a warm towel was the terrible beast: it be momster! See this book listed in our catalog