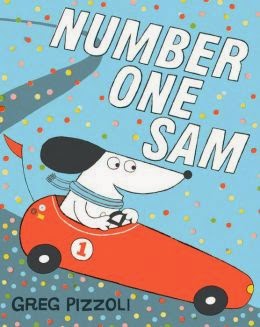 Winning feels great, right?  That’s exactly how Sam feels every time he wins a race. In Number One Sam by Greg Pizzoli, Sam is the best racecar driver he knows. He’s the best at driving fast, swerving around turns, and he always comes in first place. He is the best at driving racecars out of all of his friends, and that is simply a fact. Until one day… Sam doesn’t win. Poor Sam is so heartbroken that he switches his car number from one to (gulp) two. During the next race he is determined to come in first place, but he immediately slams on his breaks when he sees five little chicks standing in the middle of the road. He has to make a quick decision: save the baby chicks or try to win the race. I don’t want to spoil the story for you, but let’s just say that Sam learns that there are some things that feel much better than winning a race. See this book listed in our catalog