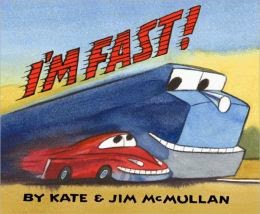 From the author/illustrator team that brought us I Stink!, I’m Bad!, I’m Dirty!, and I’m Brave! comes their latest: I’m Fast! by Kate & Jim McMullan. A mighty train engine is challenged by a zippy red racecar to race to Chicago. The racecar has only himself to worry about, but before they depart the train loads up tons of freight in a variety of train cars. The racecar takes off – “vvvvrrrrrrooooom!” And the train chugs out of the railyard – “chooka chooka chooka…” At first it seems the smaller, zippier racecar has the advantage, but once the train engine gets rolling he won’t stop! He “chooka-chooka’s” straight through tunnels while the car winds up and down mountain roads, plows through heavy snow while the car needs a push a friend (fans of the series will recognize the backhoe from I’m Dirty!), and rolls through railroad crossings while the racecar waits in traffic. Along the way, the engine shows off each car in his train and what it carries. Across mountains and deserts, through countryside and busy towns, all day and thought the night, the two friends are often neck-and-neck. Who will reach Chicago first? Car and train fans alike will love reading to find out. See this book listed in our catalog