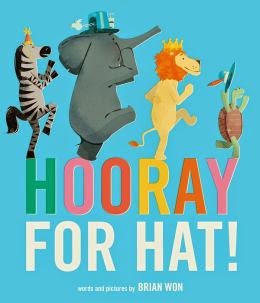 In Hooray for Hat by Brian Won, Elephant wakes up on the wrong side of the bed. When his doorbell rings, he bellows “GO AWAY! I’M GRUMPY!” But what he sees on his doorstep is a present! And when he unwraps the present, he sees it is a most amazing hat. Five hats actually, stacked up on top of each other, kind of like a super hat. Elephant is no longer grumpy. He is overjoyed. So much so, that he decides to show his friend Zebra. But when he gets to Zebra’s, he finds out Zebra is also having a grumpy day. So Elephant shares part of his hat with Zebra, which cheers him up. “HOORAY FOR HAT!” they exclaim. They wander to the abodes of their other animal friends, sharing the super hat along the way, proving once and for all, as if we had any doubt, that the right accessory can really make all the difference. See this book listed in our catalog