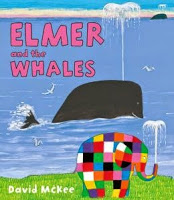 Elmer and the Whales by David McKee. Elmer, the patchwork elephant, and his cousin Wilbur decide to go on a journey to visit the whales after a visit with Grandpa Eldo. “When I was your age,” said Grandpa Eldo, “at this time of year, I used to follow the river down to the coast and watch the whales go by.” Wow! They both thought: that is fantastic, “let’s go see them” and they started on their way. Grandpa Eldo told them to just follow the river. On the way they met some crocodiles who suggested they make a raft to float down on instead. So they did. The jungle looked different from the raft. The river became faster and there wasn’t anywhere to land as they went through a gorge with cliffs. All of a sudden they were in rapids! Oh no! They couldn’t stop even if they wanted to. “Hold on, Elmer!” shouted Wilber. “I am!” shouted Elmer. Eventually the rapids ended and they drifted out to sea. They fell asleep that night on the raft. When morning came they were at sea. At sea with the whales… See this book listed in our catalog