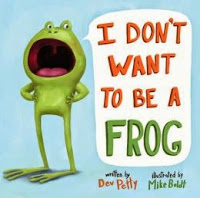 I Don’t Want To Be A Frog by Dev Petty is a cute story about nature. It is a story about a little frog who is just not happy being a frog. He thinks frogs are wet, slimy, and eat too many bugs. He wants to be something cute and warm. He has many ideas. A cat, a rabbit, a pig, or an owl would be nice. Father Frog explains that he cannot be these things because he is a frog. He does not have long ears like a rabbit. He does not have a curly tail or like to eat garbage like a pig. He does not have wings, he does not look wise, and he cannot turn his head all the way around like an owl. It is not until the big scary wolf appears that Little Frog begins to understand. Wolf tells Little Frog a little secret. He says he is very hungry and he loves to eat cats, rabbits, pigs, and owls. The one thing he never eats is frogs because they are wet and slimy and full of bugs! Little Frog realizes he is what he is, and it is all a part of nature, and he is finally glad that he is a frog. See this book listed in our catalog