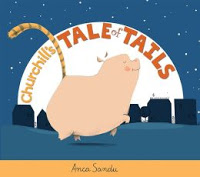 Churchill’s Tale of Tails by Anca Sandu is a story about a very proud pig named Churchill. Churchill was very proud of his tail. His tail made him feel great. One morning Churchill woke up and his tail was missing. He searched everywhere but could not find his tail. His good friends, Billy and Gruff, had a good idea: they thought maybe Zebra could help Churchill. Zebra just happened to have a spare tail, and so Churchill gave it a try. It just didn’t feel quite right, so he thought maybe he should try other tails. He tried many tails. He tried a peacock tail, a fish tail, an alligator tail. Trying so many different tails made him feel good. He was so busy with his new tails he didn’t have time for his old friends. Then Churchill met a tiny bird who had something on his head. The bird said he didn’t know what it was, just that he found it in a bush, and he had grown quite fond of it. Churchill realized that what the bird had on his head was his very own special tail. The bird very graciously returned it to Churchill, and he felt like his old self again. He was very grateful to the little bird. Churchill had made a new friend, and this reminded him of his old friends. He threw all his friends a party, and told them how sorry he was for not being a good friend, and they all forgave him. See this book listed in our catalog